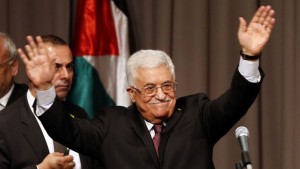 President Abbas, if you truly care about your people, you need to tell them to stop stabbing us.

They’ve killed about a dozen Israelis in the last month or so, and maybe three times that number of Palestinians have died in the attempt — suicidal stabbers, kamikaze knifers.

You’ve not condemned them. In fact, you’ve encouraged them — while simultaneously peddling the double-speak that we’ve been killing them in cold blood. You’ve publicly declared that “every drop of blood that has been spilled for Jerusalem” is clean and pure and blessed. You’ve reassured each new prospective killer that “every martyr will reach Paradise, and everyone wounded will be rewarded by Allah.”

You obviously don’t care about our people, who have had the temerity to build a thriving Jewish state in our historic homeland, and who you lie about and incite against. But since your people understandably seek their own independence, and to be freed from our rule, you need to tell them that trying to kill us one at a time with knives and screwdrivers and whatever else comes to hand is as counterproductive and doomed as the long series of previous efforts to massacre and terrorize us into leaving — the conventional wars, and the suicide bombings, and the rockets, and the car-rammings, and the relentless effort to demonize and delegitimize and isolate us internationally.

The path to the statehood and independence you seek is actually relatively straightforward. It was wide open in 1947 — all your predecessors had to do for a first-ever Palestine was accept a revived Israel. Instead, they opted for war and futile, bloody, tragic self-sabotage. Today, it’s a case of convincing Israel that it is safe for us to partner with you. Convincing us, to paraphrase president Bill Clinton at the Rabin rally on Saturday night, that the risks of peace are less severe than the risks of walking away.

Here’s the thing: Much of the world has been convinced that we’re the Goliath to your David. That super-strong Israel, a regional superpower, should be eminently capable of taking those US president-recommended risks for the cause of your people’s statehood and our own legitimacy and tranquility.

Even viewed in the narrow context of the Israeli-Palestinian conflict, however, that’s a short-sighted assessment. We all saw Hamas partially incapacitate this country for 50 days last summer — and that was a Hamas restricted to Gaza and arming itself through the cracks of our security blockade. A West Bank-controlled Hamas would fully paralyze Israel.

And if you look at the Goliath-David equation in the wider context — in the context of tiny Israel on the western edge of the vicious, shifting, unpredictable and weapons-filled Middle East — then it’s a frankly ridiculous misrepresentation. Israel is not about to render itself still more vulnerable to extremism on three sides, and with only the sea on the fourth. Better press coverage and warm messages of support from the international community are somewhat inadequate compensation for national suicide.

The irony, President Abbas, is that most of us want to partner your people to statehood. We don’t want to rule over you. We know it’s a dreadful way for you to live. And imposing it corrodes us. We feel a resonant historical link to biblical Judea and Samaria, but most of us would much rather have a smaller Israel which boasts a Jewish majority and full equality than a larger Israel, encompassing the West Bank, that loses its Jewish character, its democracy, or both.

Yet just like your duplicitous predecessor, you’re making it impossible for us to attempt that partnership.

You may think you’re making headway with the UN efforts and the international court bids and all the other legal and diplomatic and media pressure to try to impose your state upon us without negotiating viable modalities, but you’re not. Unfortunately, quite the reverse.

We tried the Oslo process, and were rewarded with terrorism. We tried unilateralism, and were rewarded with rockets and tunnels. So now we’re hanging tough — protecting ourselves as best we can, insistently maintaining that security blockade on Gaza, and insistently maintaining the military presence in the West Bank without which we would right now doubtless be facing another onslaught of suicide bombers.

It’s not that we adore and embrace the worldview of our endlessly serving prime minister. We don’t, most of us, grimly accept his bleak reported assertion to the Knesset’s Foreign Affairs and Defense Committee last week that “Israel will have to live by the sword forever.” We certainly will live by the sword for as long as we must, but we’d much rather not. We’d much rather not send our children to the front lines to protect us for generation after generation. We feel, many of us, that there is more we could do to help begin to create a climate in which peacemaking is less risky, to help begin the lengthy process of reconciliation and tolerance that, maybe, one day, could enable us to peacefully share this bloodied land. But unlike well-intentioned American leaders of past and present, we do not have the luxury of blinding ourselves to the consequences of taking ill-judged and premature risks in that supreme cause of peace-making.

For all your despicable false accusations against us, your advanced years, and your weakness, you, President Abbas, still have more power than most anybody else to help advance the gradual process of moderation that is crucial to realizing your own people’s aspiration for statehood. You are best placed to tell your people that the Jews have legitimacy here too. That the disputed land must be shared. That Jerusalem is holy to all monotheistic religions. That despite your rhetorical attempted land grab, the Old City — where Al-Aqsa sits, and the Church of the Holy Sepulcher sits, and the Temple Mount and Western Wall sit — is not yours and yours alone.

They won’t like to hear it. Fed a relentless diet of lies for generations, they won’t easily believe it. They won’t like you for telling them. But that’s sometimes what leadership is about — taking your constituents, even against their will, in a better direction for their own best interests.

You should tell your people the inconvenient truth about the Jews and their history in these parts. Far from encouraging them to stab us, you should tell them that the sooner they stop, the sooner we can start the long process of building trust — the necessary prerequisite to compromise and Palestinian independence.

Sadly, I don’t for a second think you’re going to do this. I fear you’re going to be remembered, just like your unlamented predecessor, as a Palestinian leader who failed his people because he lacked the guts to tell them the hard, inconvenient facts. And in so doing, pushed off their independence, and forced us to live by the sword, for who knows how many more years.

No, President Abbas, God does not reward those who spill the blood of innocents. There are no killing fields on the path to Paradise. If you care about your people, you should be telling them to preserve lives, not take them. Our lives and theirs.

And really, in what kind of a crazy world was it necessary for me to write this?