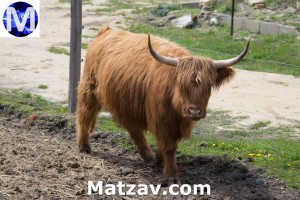 Less than two months after Maran Rav Dovid Feinstein, rosh yeshiva of Mesivta Tiferes Yerushalayim in New York, visited Howell, NJ, to get a firsthand look at a possible parah adumah, the cow is no longer suitable to be used as a parah adumah because it has given birth.

The red cow is owned by Mr. Herbert Celler, the owner of Classy Hair Designs, who was offered $1 million for the cow earlier in the year by someone in Brooklyn, but Caller said that she’s not for sale.”

The cow gave birth Wednesday morning, rendering it posul to be used as a parah adumah.

The baby, a black calf, is said to be doing well, as is its mother.

The potential parah adumah was born on April 2, 2013, during Pesach. Celler was extremely vigilant over the past two years to make sure that the cow did not engage in any work or sustain any blemishes, which may have disqualified the cow according to halacha.

The parah adumah gained attention around the world after first being reported on here at Matzav.com half a year ago, when the cow was three months shy of its second birthday.

Suprisingly, Celler told Matzav.com, he was not aware that the cow was expecting a baby.

A child of Holocaust and concentration camp survivors, Celler, who grew up in Lakewood and attended the local Betzalel Hebrew Day School, graciously opened his farm over the past half year to allow almost 40,000 people to view the cow.

Celler is obviously very disappointed about the disqualification of his cow, but he says that it must be a sign from Heaven that Klal Yisroel is not yet ready for it.

“Hashem is saying that His nation is not ready at this time. He’s ready, but we are not,” he said.