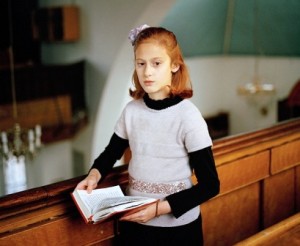 This week the National Portrait Gallery in London announced the winners of one of the world’s most prestigious portrait photography awards. Among the usual intimate family portraits, eerie shots of twins, dystopic depictions of urban poverty and suburban malaise, portraits of political officials – including a particularly unsettling close-up of Silvio Berlusconi – and politically engaged photographs of the victims and survivors of war-torn communities, is an image of a young, frum girl.

The photograph, “Chayla in Shul,” won this year’s John Kobal New Work Award, given each year to a promising photographer under age 30. Laura Pannack, a British photographer and graduate of London’s esteemed Central Saint Martins College of Art, was awarded the £4,000 ($6,250) prize and a prestigious commission to photograph a member of the U.K. film industry for the National Portrait Gallery’s permanent collection.

Culled from more than 4,000 international submissions by roughly 1,800 photographers, 59 portraits were chosen by the judges to be included in this year’s exhibition, which draws more than 200,000 people to the National Portrait Gallery each year. The show opened Thursday and runs through February 22.

I spoke with Pannack just after the award was announced to learn more about the image that nabbed this year’s prize. Five years ago Pannack, who describes herself as a “cultural Jew,” moved to the Stamford Hill district of North-East London, an area heavily populated by frum Jews that has been subject of attacks and media criticism in recent years. Pannack did not know much about the “very closed, very modest community” she encountered when she moved to the neighborhood and quickly decided she would undertake a photographic project documenting her new neighbors.

Unsure how to best approach the project, she spent many months getting to know the families, working in the schools and with the women’s and children’s groups as they slowly invited her into their world. The result is an ongoing series (working title: Purity), documenting the lives and experiences of Jewish women living in Stamford Hill.

The photographer describes Chayla, the 11-year-old subject of her winning photograph, as extremely shy and introverted, very mature and extremely intelligent. Although the majority of the photographs in the Purity series are taken in people’s homes, Chayla is pictured in the women’s section of the shul led by her father.

When Chayla, the second-oldest of 11 siblings – and, until recently, the only girl – was told that her portrait had won this prestigious award and would be prominently displayed in the National Portrait Gallery, she was embarrassed; she doesn’t like to be the center of attention.

Pannack is among a significant number of contemporary photographers who are drawing inspiration from the Old Masters and bringing painterly qualities to the gelatin silver surface.

Unfamiliar with the chareidi community before she began photographing women in Stamford Hill, she observed that “some of the traditions and rituals have really surprised me; their lives are fascinating, and it’s an endlessly interesting project with tons to learn about. You never get to the end, it would take an entire lifetime to unravel and understand.” Pannack says she had witnessed “a lot of beautiful relationships and very strong women in these communities,” which she hopes to communicate in her photographs.

“Chayla in Shul” will occupy a prominent, public exhibition space in the center of London over the next few months, and Pannack hopes that those who view her photographs will gain a “positive perception of Jewish people and of the community.”

The selection of this image is even more impressive given the context of seemingly endless reports of mounting anti-Semitic violence throughout Europe-particularly in Paris and the U.K., and especially against those most easily identified as Jews by their dress and outward observance. It’s refreshing that this portrait of a thoughtful, young Orthodox Jewish girl was awarded such a prestigious prize and will be prominently displayed in the National Portrait Gallery in Trafalgar Square.

Excepted from the November 14, 2014 email of Tablet Magazine.