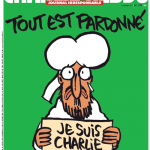 “One cannot provoke, one cannot insult other people’s faith, one cannot make fun of faith,” the pope said in Italian. “Every religion has its dignity… and I cannot make fun of it,” he continued. “In freedom of expression, there are limits, like in regard to my mom. … If he says a swear word against my mother, he’s going to get a punch in the nose.”

Francis has himself been a target of Charlie Hebdo, portrayed mockingly.