Jonathan Pollard enters his 27th year in captivity today,  November 21, even though the median sentence for those convicted of passing classified information to an ally is just two to four years.

No one else in American history has ever received a life sentence for this offense.

Successive Democratic and Republican regimes in Washington can be blamed for not commuting Pollard’s sentence. Some hold American Jewish leaders responsible for not taking a public stand on Pollard until recently and still not taking enough action.

The last seven prime ministers of Israel undoubtedly could have each made Pollard a higher priority.

But an exclusive look at Pollard’s request for clemency from President Barack Obama, which he submitted a year ago, tells a deeper story of intrigue, legal misconduct and the interference of an American defense secretary known for being anti-Israel.

Pollard filed his request for clemency last October and over the past year added seven supplemental filings with letters to Obama calling for his release from many current and former senior American and Israeli officials. After a plea from Pollard’s wife Esther, Prime Minister Binyamin Netanyahu followed up with his own formal request three months later.

A White House spokesman confirmed in May that such requests tend to be answered within six weeks. He has not said why Obama has been dragging his feet.

George W. Bush left office without responding to the request at all.

While the US Board of Prisons web site lists a “presumptive parole date” in 2015, following 30 years of Pollard’s sentence, the US Justice Department is expected to oppose parole, so Pollard is unlikely to apply. If he did apply and was rejected, it could bar him from requesting parole for another 15 years and harm chances of persuading a president to grant clemency. 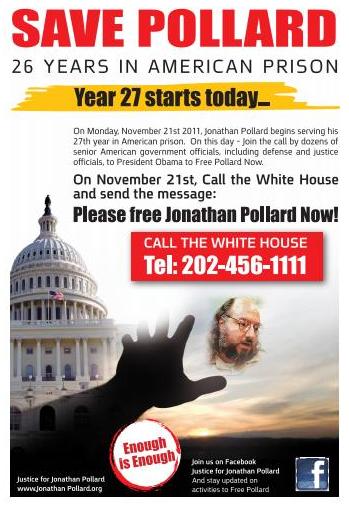 Those close to Pollard warn that due to his poor health, he may not survive four more years in prison. His clemency request reveals for the first time his long list of ailments: Diabetes, nausea, dizziness, blackouts and ongoing issues with his gall bladder, kidneys, sinuses, eyes and feet. He also suffers from Meniere’s disease, which causes him to lose consciousness and fall without warning.

Despite an exemplary prison record, applying for parole is also not an option for Pollard because of a severe impediment unilaterally imposed by the US Justice Department preventing his pro bono attorneys, Eliot Lauer and Jacques Semmelman, from seeing key documents that were submitted to the judge before he was sentenced in 1987.

Requests for the lawyers to have access to Pollard’s file have been rejected even though both lawyers obtained the appropriate “top secret” security clearances.

Since the lawyers have not seen their client’s entire court file, those opposed to parole have free reign to say anything about Pollard without the risk of being contradicted by the documents.

Explaining that their client was not seeking to exonerate himself via a pardon, Pollard’s lawyers wrote in the clemency request that “while there are serious and substantial issues surrounding the sentencing process, Mr. Pollard has exhausted his remedies in the US court system.

His sole remaining avenue of relief from his life sentence is executive clemency.”

The request lists Pollard’s offense as “conspiracy to deliver national defense information to a foreign government,” but Pollard stressed in his own words: “I was never charged with, nor did I plead guilty to harming the United States or aiding a foreign government that is an enemy of the US.”

Pollard has expressed his remorse for his crime on multiple occasions and also made a point of reiterating his remorse in the document. The loyalty that he expresses to the US sounds surprising from a man who hasn’t exactly been treated well by American institutions.

“I have never, to this day, lost my love, respect, and gratitude for everything this country has given me,” Pollard wrote. “I deeply regret what I did.

While my intention at the time I committed this offense was only to help protect Israel and never to cause damage to the US, I have long since come to understand that what I did was wrong and that I should have acted on my concerns in a more appropriate, legal manner.”

Pollard received a life sentence on March 4, 1987, despite a plea agreement he signed a year earlier in which he committed to plead guilty and cooperate fully with the investigation against him in return for a commitment by the American government not to seek a life sentence.

Prior to the sentencing, the Department of Justice submitted a victim impact statement which revealed that no concrete harm had been done to the US as a result of Pollard’s espionage.

But then-American defense secretary Caspar Weinberger submitted a 46-page classified declaration two months before the sentencing that apparently claimed the opposite. Just one day before the sentencing he submitted another, shorter letter to the judge in which he falsely accused Pollard of causing at least as much harm to American national security as had spies for the Soviet Union who were given life sentences.

Portions of the Weinberger declaration that are in the public record indicate that it consisted largely of projections of possible future harm.

Pollard’s lawyer at the time, who had full access to the document, responded to it by saying that “Secretary Weinberger nowhere alleges that the US has lost the lives or utility of any agents, that it has been obligated to replace or relocate intelligence equipment, that it had to alter communication signals, or that it has lost other sources of information, or that our technology has been compromised.

Indeed the memorandum only discusses the possibility that sources may be compromised in the future.”

Years after other agents were convicted of revealing information that Pollard was accused of leaking, his current lawyers wrote in the clemency request that it is likely that many of Weinberger’s projections never came to pass and that scrutinizing his declaration would confirm that.

“The passage of nearly a quarter century has demonstrated that the anticipated harm to the US has not materialized and never will,” the lawyers wrote. “Inasmuch as Mr. Pollard’s life sentence was premised, in substantial measure on these projections, commuting of the sentence would be just and appropriate.”

Weinberger’s downplaying of Pollard’s case in a 2002 interview with journalist Edwin Black substantiated the lawyers’ belief that the harm Weinberger projected did not materialize.

“The Pollard matter was comparatively minor,” Weinberger told Black. “It was made far bigger than its actual importance.”

Weinberger’s deputy at the time of the Pollard affair, Lawrence Korb, who is currently one of the most outspoken advocates for Pollard’s release, recently said that “Weinberger had an almost visceral dislike of Israel.”

If Weinberger’s declarations were so damaging, why didn’t Pollard object to the last-minute submissions, rebut them or request a hearing at which the government would have had to prove Weinberger’s charges or withdraw them? The apparent answer is that Richard Hibey, the lawyer of Lebanese descent whom Israel paid to represent Pollard, did not tell him that he was entitled to any of those approaches. Pollard’s clemency request includes a lengthy opinion written by former federal judge George Leighton of Chicago in which he blamed Hibey for not preventing the life sentence Pollard received.

“The evidence shows that the government engaged in serious misconduct that went unchecked by an ineffective defense counsel, Richard Hibey, and that these constitutional violations severely prejudiced Mr. Pollard and resulted in his life sentence,” Leighton wrote. “He was deprived of effective assistance of counsel as a result of his counsel’s failure to deal competently with unproven, highly damaging eleventh hour factual assertions made by the government in a supplemental declaration of secretary of defense Caspar Weinberger submitted the day before sentencing.”

The most problematic mistake by Hibey, who later represented the Palestinian Authority in American courts, was that after the sentencing, he did not file a onepage request for an appeal within the required 10 days. This barred Pollard from ever appealing his life sentence, and as a result, there has never been any direct appellate review of the sentencing.

Lauer and Semmelman, who became Pollard’s lawyers in 2000, have attempted unsuccessfully to bring the case back to courts, but their efforts have been rejected on procedural grounds, leaving clemency by an American president as the only way Pollard can leave prison alive.

“After nearly 25 years, we respectfully suggest that further incarceration of Mr Pollard would serve no purpose,” Lauer and Semmelman wrote Obama. “Any deterrent effect on others based on the sentence’s severity has been accomplished.”