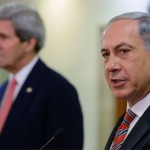 Israeli Prime Minister Bibi Netanyahu is considered the most-admired world leader among American evangelical Christians, with 16 percent mentioning him more than any other leader, according to a new poll by the Brookings Institution.

Among respondents of all religious backgrounds, Netanyahu was the third-most-popular world leader in the survey, behind President Barack Obama and former president Ronald Reagan.

In terms of how they vote in American elections, the majority of evangelicals said a candidate’s position on Israel is significant to them.