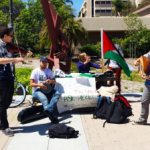 More than a third of Americans favor either some type of economic sanctions or more “serious action” against Israel for construction in Judea and Samaria, a new survey has found.

The survey was published ahead of the Saban Forum’s annual conference from Dec. 4-6, titled “Israel and the United States: Yesterday, Today, and Tomorrow.” The conference’s planned speakers include Israeli Defense Minister Moshe Ya’alon, U.S. Secretary of State John Kerry, and former secretary of state Hillary Clinton.