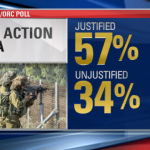 A majority of Americans say Israel’s military actions in Gaza are justified, with only four in 10 saying that Israel has used too much force, according to a new national poll.

But a CNN/ORC International survey conducted Friday through Sunday also indicates that favorable opinions of Israel have edged down since earlier this year.

The poll was released Monday, as the death toll in the current conflict soared.

According to the poll, 57% of the public said the Israeli actions against Hamas, the Palestinian organization that runs Gaza, are justified, with just over a third saying they are unjustified. Forty-three percent of those questioned said Israel’s using about the right amount of force, with 12% saying they’re not using enough. Nearly four in 10 said Israel is using too much force in Gaza.