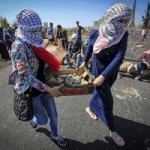 73% of Palestinians in the West Bank and Gaza oppose and 21% favor the creation of a Palestinian state on the 1967 lines with some land exchange, according to a poll conducted on Nov. 20-22 by the Center for Opinion Polls and Survey Studies at An-Najah University in Nablus.

58% in the West Bank said they reject the rise of an armed intifada in the Palestinian territories, while 39% approve.

74% reject and 20% support the creation of a binational state for both Arabs and Jews.

70% support and 24% reject ceasing security coordination between the PA and Israel.

When asked “If elections are conducted in the Palestinian territories, do you think they will be fair?” – 51% said no, 38% said yes.