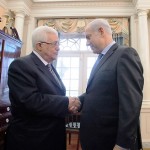 71% of Israeli Jews believe that signing a peace agreement with the Palestinians would not bring a stop to Palestinian terror against Jews, while 25% believe it would, according to the latest Peace Index Survey conducted on Nov. 30-Dec. 1.

While 61% of Israeli Jews favor conducting peace negotiations between Israel and the Palestinian Authority, only 21% said they believed negotiations will lead to peace, while 78% said they would not.