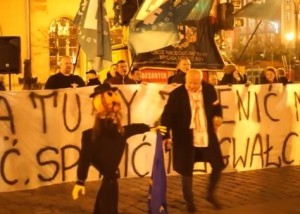 Polish prosecutors have launched a probe into a nationalist anti-refugee protest in the city of Wroclaw where demonstrators burned an effigy of an Orthodox Jewish man, ABC News reported.

Prosecutors said they launched a probe of Wednesday’s demonstration, attended by dozens at a portable stage in front of city hall, at the request of Wroclaw Mayor Rafal Dutkiewicz.

According to a spokeswoman for the prosecutors, investigators were trying to determine whether protesters broke the law by publicly insulting people based on ethnicity, race, religion or nationality — which is punishable in Poland by up to three years in prison, according to the report.

Jonny Daniels, founder and executive director of Holocaust education initiative From the Depths, said the incident marked a pattern of antisemitic incidents in the country, which he said are often ignored by the authorities.

“Unfortunately, this incident is following a pattern of antisemitic events in Poland that are simply not being taken seriously by the authorities,” he said. “You have antisemitic graffiti all over major cities like Kraków and antisemitic chants at football games and none of these are ever dealt with.”

“Poland needs to deal harshly with these acts of racism, be it, from the smallest incident to the burning of an effigy, because unfortunately as we’ve seen in the past when right wing extremists demonize a race and jokingly burn an effigy of them, it doesn’t take too long until they start burning actual people,” he told the Algemeiner.

Polish Chief Rabbi Michael Shudrich noted the odd juxtaposition of burning effigies of Jewish people at a rally meant to protest against an influx of refugees from the crisis in Syria — who are mostly Muslim.

“This is just one more example showing how the hatred for migrants comes from the same place as the classic hatred for Jews,” he said.

The incident came only a few days after Polish media reported on a banner hung in the city of Poznon, which was quickly removed, that called for an “Islamic Holocaust.”