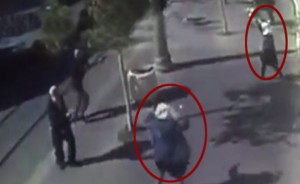 Following a 3-day investigation, it appears that the policeman who shot two female terrorists who attacked passersby with scissors at the Machane Yehuda Market in Yerushalayim last month will not be prosecuted. The investigation found that it will most likely not be possible to prove any criminal intent on behalf of the policeman.

The investigation also found that due to the fact that the security camera footage of the incident has no audio track, it will be impossible to disprove the policeman’s claims that he called on the terrorist to drop her weapon before shooting at her.

The investigation, which was launched by the Attorney General of Israel upon the recommendation of Israel’s State Attorney, was intended to examine the claims that the policeman shot the terrorist after she had already been neutralized and posed no threat.

Public Security Minister Gilad Erdan criticized the investigation: “I express my regret for the decision made by the Police Investigation Unit to investigate the police sapper who thwarted the terror attack in Yerushalayim in which two girls took part.

“I can’t understand why time and again they are trying to judge security forces for decisions made in a split second at the scene of a terror attack, as if it was a lab and one could immediately know what other weapons or explosives were on the body of the terrorists, and whether they were completely neutralized or could still stab whoever nears them,” Erdan added.

Last Friday, an indictment was submitted against the relative of the female terrorist that was eliminated, who committed the attack with her.