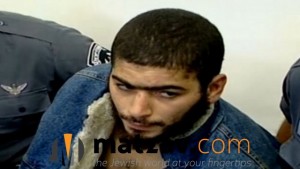 As searches for the gunman behind the fatal shooting in central Tel Aviv entered their second night tonight, Motzoei Shabbos, policemen deployed in force in the north of the city and concentrated their operations there, apparently believing that the killer could be hiding in the area.

Security sources said today that the suspect, Nashat Milhem, was “dangerous,” and warned the public to be alert. Two extreme scenarios feared by police, the NRG news site said, was that he would attempt to take a family hostage in their home or that he would attempt a second shooting attack. The NRG report said he still had the murder weapon, a submachine gun, with him.

According to a Walla news report, security officials increasingly suspect that Milhem, who allegedly carried out the attack at Dizengoff Street’s Simta Bar that killed two and injured seven more on Friday afternoon, was also behind the murder of a taxi driver in the north of the city. Ayman Shaaban, 42, a Bedouin father of 11 and husband of three from Lod, was found dead from gunshot wounds approximately an hour after the Dizengoff shooting. (He will be buried in Lod at 1 p.m. on Sunday afternoon.)

Security was tightened at educational institutions and municipal facilities in Tel Aviv ahead of Sunday morning’s return to weekday operations. But with the gunman still on the run, the mayor said it would be alright for parents to keep their kids at home. The Tel Aviv-Jaffa municipality said security forces would be deployed around schools, kindergartens and crowded areas.

Police on Saturday evening named Milhem — a 29-year-old resident of Arara, a village in Wadi Ara in northern Israel — as the suspect, having kept his identity under wraps for more than 24 hours.

According to Hebrew media reports, authorities now believe their best chance of capturing Milhem may be to wait for him to venture out of his hiding place in order to get food or attempt to find transportation. Releasing Milhem’s name and photo could help the public identify him if and when this happens, the authorities said, explaining the lifting of the gag order.

Milhem, an Israeli Arab who was jailed for five years for a 2007 attack on a soldier, is suspected of shooting and killing two people and wounding seven more in Friday’s attack in central Tel Aviv. His brother was taken into custody as an alleged accomplice.

Milhem’s father Muhammad, a volunteer police officer from Wadi Ara in northern Israel, contacted the authorities after recognizing his son in footage of the attack shown on television. He had been telephoned by relatives, saw the footage himself, and then went to the local police station. He was questioned by police on Friday evening, and computers and other items in the family home have been seized by police as part of the investigation into the attack.

The murder weapon was apparently taken from the father’s safe at home.

Muhammad Milhem told reporters Saturday that “I am an Israeli citizen, a law-abiding citizen. I heard what my son has done, and I am sorry. I did not educate him to act in that way. I went to the police and helped the security forces. I did not expect that my son would do such a thing.” He expressed his sorrow to the families of the victims, and said he hoped those who were injured would make full recoveries.

“Just as he murdered two people, he can murder more,” Muhammad said of his son. He added: “I am worried and I want to hear that he is in police hands.”

The two victims of the attack were shot dead in the Simta Bar on Dizengoff Street. One of them, Alon Bakal, was a manager there. The second, 30-year-old Shimon Ruimi from Ofakim, was one of five long-time friends who were celebrating a birthday together.

The funeral of Bakal will take place in Carmiel on Sunday at 3 p.m. Ruimi will be buried in Ofakim, also at 3 p.m.

Prime Minister Netanyahu visited the site of the shooting on Saturday evening, vowing to “dramatically increase” police enforcement in Arab towns throughout the country and to root out pockets of lawlessness and incitement in Israel’s Arab communities.

While he acknowledged and expressed satisfaction with Arab leaders’ condemnation of the killings, he said this was not enough. “We all know there is wild incitement by radical Islam in the Arab sector,” he said. “Incitement in mosques, incitement in the education system, incitement in social media…I will not accept two nations within Israel: a lawful nation for all its citizens and a (second) nation within a nation for some of its citizens, in pockets of lawlessness.

“Those times are over,” he stated. “Whoever wants to be Israeli must be fully Israeli — both in rights and in obligations. And the first and paramount obligation is to abide by the laws of the state.”