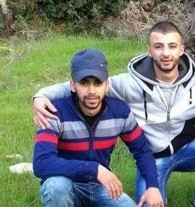 A man seen in a video beating today’s Palestinian stabber after he had already been shot by police was doing so to disarm the attacker, who was still waving a knife, police said Wednesday evening, after questioning him.

In the video taken at the stabbing near Shaar yaffo, the bystander can be seen beating the suspect who is lying on the ground.

One stabber died at the scene, and the second later died of his wounds.

In the video, the man can be seen wielding what looks to be like a large metal pipe and forcefully hitting another man, unseen in the clip but presumably one of the stabbers, forcefully several times.

Other officers can be seen in the clip attempting to prevent bystanders from approaching.

Police on Wednesday evening issued a statement saying that from the testimonies of officers and eyewitnesses at the scene, the terrorist managed to get up and waved the knife wildly even after being shot by female Border Police officers who were nearby.

According to the statement, the man seen in the video used the pipe to hit the terrorist’s hand in an effort to get him to let go of the knife.

An officer at the same time was struggling to pin the terrorist to the ground and neutralize the threat.

The police statement said the man testified to officers regarding his actions at the scene.

The two terrorists were named by Palestinian media as Anan Abu Habsah and Issa Assaf, both 21, from Qalandiya. Read more at Times of Israel.