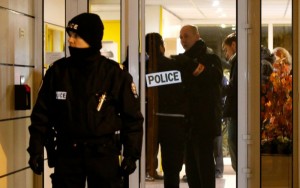 French police have reportedly found an explosive vest that contains the same bolts and explosives as the ones used during the Paris attacks ten days ago.

The discovery was made Monday by a street cleaner in a suburb on the southern of Paris.

The vest was reportedly found in the same zone where the cellphone of a terror suspect sought by police was geo-tagged. Read more at The New York Times.