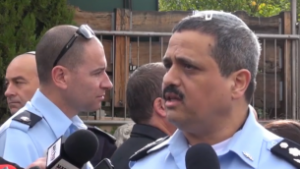 Hundreds of police officers were deployed in Tel Aviv today, Erev Shabbos, and inspection checkpoints were set up at several locations throughout the city, a week after a deadly shooting attack at a bar on the city’s busy Dizengoff Street.

Tel Aviv residents reported witnessing police officers patrolling the site of the attack, and drivers in the area were asked to halt and present identification.

Several Hebrew-language media outlets reported that the terror alert level in the city had been raised, although police stressed they had no indication of an imminent terror threat in the region. 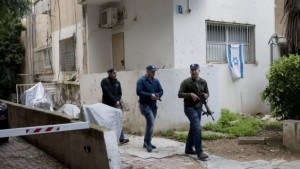 The heavy deployment in Tel Aviv may signal a possible development in the ongoing manhunt for a fugitive Arab Israeli suspected of killed two people in a Tel Aviv bar last Friday, before he went on to murder a cab driver whose taxi he hailed to make his escape.

Police on Friday also descended in large numbers on a neighborhood in the Arab village of Arara, the hometown of Nashat Milhem, who, since the shooting, has remained at large. Authorities have warned he is armed, dangerous and capable of striking again.

Earlier reports have said that police do not know where Milhem is, although law enforcement authorities were looking into the possibility that he fled to the West Bank. Israel Police Commissioner Roni Alsheich indicated at a press conference Tuesday that Milhem was no longer believed to be in Tel Aviv, although he refused to elaborate. Alsheich said it was possible to “dramatically reduce the tension in the Tel Aviv area.” He said he could not elaborate “in order to not cause harm” to the ongoing investigation.

Milhem was known to have fled the scene of the shooting on Dizengoff Street on foot, and hailed a cab on nearby Ibn Gabirol Street. The cabbie drove to north Tel Aviv, where Milhem worked. There, Milhem is said to have killed the driver, Ayman Shaaban, outside the city’s Mandarin Hotel. He then drove the cab himself to Namir Road, where he abandoned it near a bus stop.

According to Channel 2 TV, Israeli security officials increasingly believe Milhem may be in the West Bank, although most details of the search remain under a gag order.

Milhem allegedly killed two people in a shooting attack outside the Simta Bar on Tel Aviv’s busy Dizengoff Street last Friday, New Year’s Day, before fleeing and disappearing. Shift manager Alon Bakal, 26, and patron Shimon Ruimi, 30, were killed in a hail of bullets as the suspected gunman opened fire with a submachine gun he allegedly stole from his father. Seven people were also wounded.

Police on Wednesday evening officially named Milhem as the killer of Bedouin taxi driver Ayman Shaaban some 60 minutes after the bar attack. In fleeing the scene, police said, Milhem shot dead Shaaban after hailing and escaping in his taxi.

According to a Channel 10 report, it would be more difficult for Israeli authorities to track down Milhem in the north than in the West Bank, where the Shin Bet security service has many informants. Police assessments quoted by the TV station said Milhem had likely received assistance both before and after Friday’s attacks.