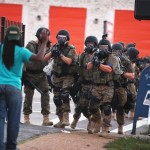 In the wake of the Ferguson riots, police departments across the nation have been trying to return a vast array of military gear that was supplied free of charge by the Defense Department. The items include grenade launchers, aircrafts, landmine detectors, and even amphibious tanks. Returns or trades aren’t happening though because the Pentagon still officially owns the supplies they’ve technically leased to police.

With so many requests for returns, the Defense Department has put its program under reevaluation, halting returns temporarily.

If that wasn’t bad enough, the Pentagon has wasted $100 million returning unneeded vehicles from Afghanistan to the U.S. when giving them to allies, or even blowing them up, would be cheaper. Read more at Mother Jones.