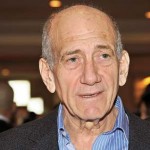 Former prime minister Israeli Ehud Olmert launched a last-ditch effort to avoid part of a prison sentence Tuesday, telling a panel of Supreme Court justices Tuesday that the various graft affairs in which he was implicated were the consequence of personal “vendettas” during his years in public service.

Olmert was in court Tuesday to appeal an eight-month jail term handed down by the Yerushalayim District Court in May 2015. In that case, known as the Talansky affair, Olmert was convicted of receiving envelopes full of cash from a US millionaire.

The former prime minister is also set next month to begin serving 18 months in prison for graft, in a case where he facilitated permits for the construction of a Yerushalayim housing complex, Holyland, when he was serving as the capital’s mayor.

Olmert was appealing Tuesday to serve the time he was given for the Talansky affair concurrently with the 18 month-sentence for the Holyland affair, rather than consecutively.

“I am not going to make claims regarding the existence of the State of Israel. I speak of years in which I never became any richer and devoted days and nights to people and institutions on matters which determine the quality of our lives, the benefits to the lives of many people,” Olmert told the bench.

Olmert also said that he and his family felt persecuted. “It says in our Jewish texts ‘A person who saves a soul, it’s as if they saved an entire world.’ It is no secret; I am in the state I am in from a subjective perspective. I don’t ask anyone to agree to it or accept it, but in my feeling and the feelings of my family, my five children, my wife and my 11 grandchildren, it is seen as a vendetta.”

“The price I have paid,” Olmert said, “is one I cannot emotionally stand or even describe. I turn to you [the justices] only on this level. I am not arguing, not rejecting now things that were said. I only speak of one thing: How in all of this, the human aspect, the personal aspect, plays a part.”

Justice Neil Handel told Olmert attorney Eyal Rozovsky that the request for the jail terms to run concurrently was illogical. “If we are discussing two affairs and the stance is that two punishments should be served at the same time, where‘s the logic in that?” he asked. “A man carried out two offenses, two different acts, why should he get this sort of discount? Assuming the conviction remains, why not do it consecutively, so that he will be punished for the other affair?”