In keeping with his campaign pledge, Congressman Dan Donovan returned to meet with representatives of Brooklyn’s orthodox Jewish community and update leaders on his first nine months in office.

As the only Republican in the NYC delegation, Mr. Donovan has the unique ability to advocate for NYC as a member of the Republican majority in Congress. The Sunday morning meeting was hosted by FJCC, Flatbush Jewish Community Coalition, executive board member Alan Esses, a longtime Flatbush Hatzoloh and Sephardic Bikur Cholim leader.

FJCC executive board member Leon Goldenberg thanked the Congressman saying, “Mr. Donovan kept his campaign promise and made his first trip abroad to Israel. We are counting on him to represent our community’s deeply held interests in support of the safety and security of Israel.”

FJCC executive board members Avi Schick, Chaskel Bennett and Peter Rebenwurzel, among others present, discussed Federal employment discrimination cases for Americans with relatives in Israel accused of dual loyalty; the BDS movement on college campuses and Federal sanctioning of labeling goods from Judea and Samaria.
Assisting struggling tuition paying parents via federal tax deductions or credits was a subject of intense discussion. Future conversations and follow up in Washington DC is now being planned.
Pertinent issues affecting the local Flatbush community including crime, police/ community relations and terrorism were addressed, with representatives of Agudath Israel of America, COJO of Flatbush, Flatbush Shomrim and Flatbush Hatzoloh in attendance.

Representative Donovan, a member of the House Homeland Security Committee and House Foreign Affairs Committee pledged to work hand in hand with the Jewish leaders to combat rising antisemitism and threats to the Jewish community.

“We were honored to host the Congressman’s first meeting with the Brooklyn Jewish community last year, before the special election” stated Josh Mehlman, FJCC Chairman, “It is important that we continue to discuss community concerns and policy issues- both domestic and international with our elected representatives. Meetings like this are essential to that effort.” 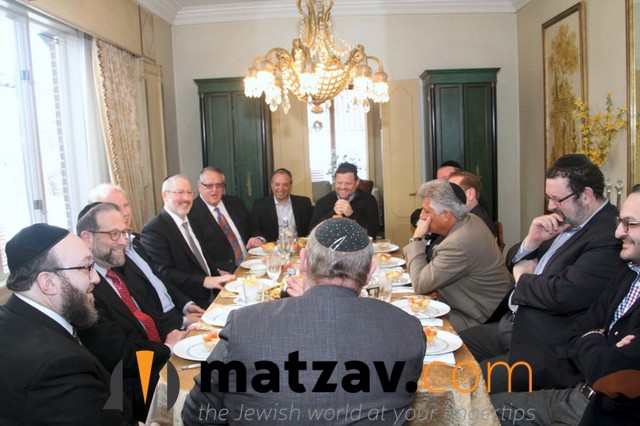