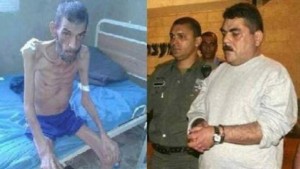 A Facebook post by an Arab journalist comparing the wretched condition of Syrian prisoners with that of well-fed Palestinians serving time in Israel has gone viral, eliciting surprising praise of Israeli practices from across the Arab world.

The side by side photos of an emaciated Syrian in an Assad-regime prison next to the paunchy looking Samir Kuntar leaving an Israeli jail after nearly 30 years were posted by al-Jazeera journalist Faisal al-Qassem following an alleged Israeli airstrike that killed Kuntar in his Lebanon home on Shabbos.

“Samir Kuntar left an Israeli prison with a beer belly and a doctorate. At the other extreme, this is how Syrians leave Assad’s prisons,” read the text accompanying the photo.

The Syrian man appears famished and malnourished, barely able to hold up his bony figure as he peers at the camera from the bed he is sitting on.

The photo of Kuntar is from his 2008 release from an Israeli prison after 29 years behind bars over the brutal slaying of four Israelis in a 1979 terror raid on the northern Israeli town of Nahariya, an attack in which he smashed the head of a four-year-old with his rifle butt, killing her.

He was released in a prisoner exchange with Hezbollah in exchange for the bodies of slain IDF soldiers Eldad Regev and Ehud Goldwasser.

While in prison, Kuntar participated in a program through which Palestinian prisoners were allowed to take online courses from the Open University of Israel, and graduated with a Bachelor’s degree in Social and Political Science. Some Hebrew media sources claim he also obtained a masters and PhD as well.

Al-Qassem is a well known Syrian broadcaster who hosts the live debate show “The Opposite Direction” on the al-Jazeera network. Known for his provocative on-screen style al-Qassem has gained notoriety across the Arab world with his Facebook page amassing 8.7 million followers.

While some reacted with anger to the post, criticizing al-Qassem for the seemingly pro-Israel message, many responded with praise of Israeli prison conditions highlighting the stark difference to many other countries in the Middle East.

“We are taught that Israeli prisons are the worst in the world but in fact we know that the Israelis are more merciful than all of the Arabs,” wrote one Facebook user in Arabic. “Some say that the Zionists are our biggest enemy, dogs and murderers. But Muslims kill more Muslims that the Zionists,” read another.

Orit Adato, who served as commissioner of the Israeli Prison Service from 2000 to 2003, said that criminal prisoners around the world are allowed to study but when it comes to prisoners involved in political violence, Israel is particularly lenient.

“The prisoners in Israel enjoy conditions above and beyond those of any others in the world,” she said. “It is part of a humane Israeli approach that even prisoners deserve rights.” Prisoners’ rights activists say conditions are tough however, and prisoners have staged several mass hunger strikes in protest.