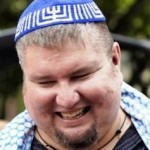 As reports of the ‘Global Pogrom’ around the world reflect the latent anti-Semitism brought out by Israel’s battle to disarm Hamas in Gaza, one non-Jewish Canadian wanted “to really understand what Jewish people go through,” and decided to “become a Jew”for a week.

Ryan Bellerose is Métis, from the native tribes who make up 1.4 per cent of Canada’s population, and is an advocate for the rights of all indigenous peoples, including Jews. In May, watchdog Honest Reporting flagged a Twitter exchange between Bellerose and Tony Blair’s sister, a partisan journalist well known for advocating for Hamas in Gaza.

Bellerose tweeted: “I believe in civil and human rights for all people, but I advocate for indigenous rights, the Jews are an indigenous people.”

On the Israellycool blog this week, Bellerose described the racism and bigotry his family has suffered as Métis and what he personally experienced first hand.

“But it was the reaction of people to the attack on some of my Jewish friends at a political demonstration that really sent it home to me,” he wrote.

“I decided that in order to really understand what Jewish people go through, I was going to ‘become a Jew’… All I had to do to incur the hatred and enmity that comes along with being Jewish, was put on a hat.”

“I didn’t need to speak, walk or act differently, just put on a hat that identifies me as a Jew. Now think about that,” he said. “I wore the same clothes I always wear, spoke the exact same way, walked the same way, but by putting on a small piece of woolen apparel, I suddenly became despised to the point where it was uncomfortable for me to walk in certain areas in my own city here in Canada.”

“I had a few people threaten me with physical violence but in all honesty, I am not a small man so I was not concerned. It just made me think about what smaller people must go through, people who do not have my gifts. I should be clear: while I wore the kippah, I tried not to behave badly. I maintained my generally civil disposition, I still held doors, I still behaved much like I normally do. I didn’t suddenly keep kosher, I wasn’t keeping Shabbat, I just wore the hat. But to some people, that made me a target for hate. It made me a Jew.”

As a “Jew,” Bellerose, while wearing a kippah, said, “I was representing Jewish people, and if I did something that reflected poorly on them, it could make things harder for other, smaller Jewish people. So even though there were multiple times when I would have loved to physically educate someone, I had to show restraint, something that I am not always able to do when I am not Jewish for a week. I learned a lot though, and some of it was actually positive.”

“The positive side was I learned to not assume. A couple of times I was positive that I was about to have a very bad experience, but was pleasantly surprised. I had several people say ‘Shalom’ and on Friday night, several people said ‘Shabbat Shalom.’ …I had an Egyptian taxi driver say, ‘You Jews, pretty good people, you got a raw deal.’ One Arab woman said, ‘If they gave my country to the Jews, we would all be rich.'”

With those odd exceptions he said, “sadly I had a lot of poor experiences.”

“People have become inured to the quiet bigotry that Jews face, probably because they are pale skinned and often DON’T LOOK ANY DIFFERENT than most of us,” Bellerose wrote. “We have stopped taking it seriously when a Jew says, ‘What you just said makes me uncomfortable.’ Because they look just like us, it’s hard to understand that they could be targets, BECAUSE TO WESTERN PEOPLE IT DOESN’T MAKE SENSE TO BE PREJUDICED AGAINST SOMEONE WHO LOOKS LIKE YOU.”

“The most common argument I hear when I tell someone that what they just said was antisemitic bigotry is ‘You guys always claim that.’ Ignoring that I am in fact not a Jew, and that in fact when someone is accused of antisemitism, its almost always a valid accusation. The reason it is said so much, is because in fact it exists and is prevalent. The scary thing is that most Jews won’t call it out BECAUSE people accuse them of being over sensitive. I’ll tell you what. I am far from sensitive, but if I see racism or bigotry, I will call it out and if someone wants to debate it, I will.”

“I had an idea of what Jews go through but to be honest, I had no idea of how deep this antipathy runs,” he said. “…people asking if they could touch my hat, getting glares and dirty looks from people I had never seen before and things of that nature, but to do that only shows what everyone already knows – that some people have an irrational hatred of a people they have never spoken to. I was not shocked that people are bigots. I was shocked at how accepted it seems to be, and even more shocked at the actual depth of it all.”

“The only people responsible for Jew hatred are the ones hating, and the people who will end up paying for that hate in the end, are one and the same,” he said.

“To my Jewish friends: you have allies. Sometimes they do not even realize they are your allies, but anyone who shares the common values of freedom, of the right to assemble, the right to speak our minds, and equality for everyone, supports you and everything you stand for as a people. Stay strong, stay resolute in the face of persecution and great pressure. You have a great tradition of doing so and thus persevering against all odds. I do not see that changing.”

“I know wearing a kippah didn’t actually make me Jewish,” he said. “In fact, it really hammered home the feeling of alienation and persecution that I think Jewish people feel regularly. If anything, it made me homesick for Israel and for my own home. The former, a place that is not my home, but where I felt real tangible joy at seeing indigenous people living comfortably in a state of their own with no apologies, and my home, because sometimes I just want to hide from the world and Paddle is a good place to do that.”