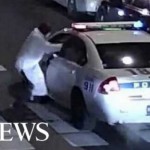 The man suspected of shooting a Philadelphia police officer Thursday evening told authorities that he did so as part of his allegiance to ISIS, Commissioner Richard Ross announced Friday.

The cop, 33-year-old Jesse Hartnett, was sitting in his patrol vehicle when the suspect, Edward Archer, 30, approached and fired 13 times through the driver’s side window.

Hartnett was hit in the arm three times but is expected to make a full recovery. Read more at ABC.