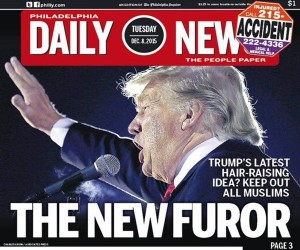 The day after Trump’s call for a ban on Muslims entering the United States, assistant city editor David Lee Preston tweeted out the Tuesday newspaper cover, with the question: “Remind you of someone?” The subscription-only edition, first reported by the Hollywood Reporter, plays on the sound-alike words “furor” and “fuhrer” – the German word for “leader” infamously used with Hitler.

The front-runner’s call for a “complete and total shutdown” of Muslims entering the country was drawing fire from all sides – with fellow Republican presidential candidates blasting the idea as “unhinged” and indicative of Trump’s inexperience.

But the real estate billionaire was unbowed Tuesday, telling CNN there is “no choice but to do exactly what I said until our country’s representatives can figure out what…is going on.”