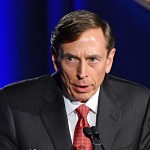 “We’re talking about years, many years in the case of Syria,” Petraeus said today in a presentation to business executives at a Tokyo hotel. “What we’re doing right now is disrupting. We are gradually chipping away at the strength” of Islamic State, he said, adding that gains could not be sustained without ground forces.

“I do believe the Iraqis can be the ground forces that can deal with this over time, but again it will be months and years, not days or weeks,” he added.

A U.S.-led coalition extended a campaign of airstrikes against Islamic State from Iraq to Syria this week after the group seized control of parts of both countries and killed two U.S. journalists and a British aid worker. Obama told the UN General Assembly in a speech this week that extremists targeted by the strikes understand only “the language of force.”

Petraeus, 61, who also served as director of the Central Intelligence Agency from 2011 to 2012 and is now chairman of KKR Global Institute, an investment management firm, compared the situation to attempts to gain control over al-Qaeda forces in western Pakistan. He said it was necessary to avoid any let-up in airstrikes.

“We have seen this elsewhere,” he said. “You have to keep on disrupting. If you let up the pressure, then al-Qaeda senior leadership will come back.”