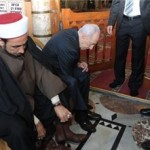 “We have to unite our forces to put out fires, and we have to be emissaries who carry the message of peace,” said the Israeli president. “Religious faiths have a negative attitude towards terror, which brings only bloodshed, sorrow and tears,” he added.

For his part, Sheikh Samir said Acre represented harmony between Judaism and Islam.

Peres also met some 50 Muslim leaders in Acre and discussed the importance of establishing equality between Jews and Arabs, who the report said enjoy equality under the law but not in practice.

Peres toured the al-Jazzar mosque, the second most holy site for Muslims in Israel, and addressed occurrences in Libya. “We are witnesses that the Libyan people are condemning dictators and corruption, and demanding peace and liberty. I hope the peoples of the region become free and liberated,” he said.