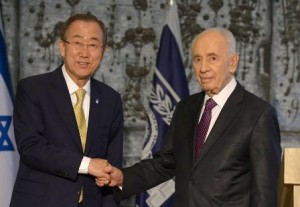 President Shimon Peres met this morning with United Nations Secretary General Ban Ki-moon at the President’s Residence in Jerusalem. President Peres issued a call to the UN Human Rights Council and said, “I call upon the council to condemn terrorism, especially of Hamas, in the strongest terms. Standing for human rights for all and standing against terrorism are one and the same. We reject the idea of appointing a committee to decide who is right and who is wrong. Terror is a danger to the world and the fight against it is global. No country will be immune to the threat of terror if we don’t fight it together.”
President Peres went on to address the situation in Gaza and said, “Every country has the obligation to protect itself against attacks and attempts to kill innocent civilians. No state in the world would be willing to accept rockets fired at its mothers and children from the sky and terrorists emerging from tunnels to kill innocents for no reason and with no justification. Instead of investing in education, in healthcare and in building a future for Gaza, Hamas wasted millions on tunnels and rockets. The people of Gaza are not our enemies. Gaza could have become a center of trade but Hamas turned it into a center of terror. The people of Gaza could have been given hope but instead Hamas brought them destruction. Hamas built an infrastructure of terror beneath schools and kindergartens. They use hospitals to launch attacks. They hide in houses and use their children as human shields. Mr. Secretary-General, they even use your UNRWA schools to store their rockets. The behavior of Hamas is a criminal act against their own people and ours. The death of innocent civilians pains me personally and it pains our people. We sanctify life, every life. Hamas glorifies death and they are the ones responsible for the deaths in Gaza. We must say clearly – terrorism will never bring peace. The way to peace is through negotiations, dialogue and compromise. ”

President Peres criticized Qatar’s funding of terrorism and said, “Qatar does not have the right to send money for rockets and tunnels which are fired at innocent civilians. Their funding of terror the must stop. If they want to build then they should, but they must not be allowed to destroy.”
President Peres also addressed the suspension of flights to Israel and said, “I regret that airlines have suspended flights. The real answer is not to stop flights but to stop the rockets. If airlines will submit to terror then they invite more rocket fire and a greater danger not just here, but across the world.”
Secretary General Ki-moon talked about being ‘compelled to visit Israel once again on an urgent mission’: “This is my third such urgent mission during the last five years. The violence must stop now and we must immediately start dialogue which addressed all the root causes which have already been identified, discussed and negotiated for a long time. I know there is rockets continue to threaten Israeli civilians and disrupt normal life. I have repeatedly condemned it and will continue to do so. There is a deep pain and anguish at the loss among Palestinians. As Secretary-General of the United Nations I will not be silent in the face of this tragedy.” He continued to equate the situations on both sides.
Last night PM Netanyahu met with Secretary General Ki-moon at the Defense Ministry in Tel Aviv, where he was presented with a display of Hams rockets and terror methods. Netanyahu showed Ban, among other things, some of the long-range rockets that Hamas has used to target central Israel. Netanyahu also showed the UN chief some proof that Hamas has been using civilians as human shields.
Netanyahu stated that it’s clear that Israel is doing what any country would do if terrorists rained down rockets on its cities and towns. “Now, in the face of such wanton terrorism, no country could sit idly by. It would exercise its right, inherent and legitimate right of self-defense as we are doing, and act decisively to end the threat to its citizens. We accepted the Egyptian ceasefire proposal. I don’t need to remind you it was a proposal that was supported by the UN, by the Arab League, by the United States, by Europe. Hamas rejected it. We accepted the humanitarian ceasefire proposal that the UN proposed afterward. Hamas rejected that. We accepted the ceasefire proposal of the Red Cross in Shejaia. Hamas rejected that, twice. I think the international community must take a clear stand; it must hold Hamas accountable for consistently rejecting the ceasefire proposals and for starting and prolonging this conflict. The international community must hold Hamas accountable for its increasing and indiscriminate attacks on Israeli civilians. And the international community must hold Hamas accountable for using Palestinian civilians as human shields deliberately putting them in harm’s way, deliberately keeping them in harm’s way.”
“You know, Mr. Secretary, the international community has pressed us to give cement to Gaza to build schools, hospitals, homes. And now we see what has happened to those deliveries of cement. They have been used to dig tunnels next to a kindergarten, not to build a kindergarten but to build a tunnel that penetrates our territory so that Hamas can blow up our kindergartens and murder our children. They’ve used for a long time our willingness to try to keep civilians at a minimum. They’ve been using them to keep on firing at us. We have even opened up a field hospital, Mr. Secretary, to help Hamas civilians, and Hamas is preventing civilians of Gaza from going to our hospital. I believe that you understand that it is the right of every state to defend itself. And Israel will continue to do what it needs to do to defend its people. This is not only our right; this is our duty,” Netanyahu concluded.