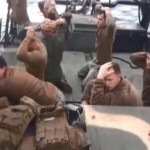 The latest revelations in the circumstances surrounding the U.S. sailors’ detention last Tuesday came in the first public account of the events released by the U.S. Central Command Monday.

“A post-recovery inventory of the boats found that all weapons, ammunition, and communication gear are accounted for minus two SIM cards that appear to have been removed from two handheld satellite phones,” Central Command said in the release.

The 10 American sailors and their two riverine command boats were taken into custody by the Islamic Revolutionary Guard Corps after Iran accused them of drifting into its territorial waters while in the Persian Gulf. The sailors were approached by Iranian boats after one of the Navy craft encountered a mechanical problem, causing the sailors to stop and troubleshoot.

The “preliminary timeline” released Monday did not provide additional insight into what caused the sailors to deviate from their planned route between Kuwait and Bahrain Tuesday, though it noted that a forthcoming Navy command investigation will yield more details about the circumstances of the detention.

The account did note that the sailors and their boats were approached by multiple Iranian vessels carrying “armed personnel” and were held at gunpoint during their detention. There was also a “verbal exchange” between the Iranians and the American sailors.

“Initial operational reports indicate there was a verbal exchange between the sailors and the Iranians but no exchange of gun fire,” the account explained. “Armed Iranian military personnel then boarded the RCBs [riverine command boats], while other Iranian personnel aboard the Iranian vessels conducted armed over-watch of the boats with mounted machine guns. At gunpoint, the RCBs were escorted to a small port facility on Farsi Island where the U.S. sailors disembarked and were detained for approximately 15 hours.”

The initial account also stated that there was no evidence that the sailors were “physically harmed” during their detention. The Navy command investigation will further examine Iran’s treatment of the 10 sailors.

Following the sailors’ release last Wednesday morning, Iran state media released images of the U.S. naval personnel in captivity which indicated that the Iranians had seized their equipment, boots, and weapons. Other pictures also showed Iranian personnel handling the sailors’ weapons and ammunition and viewing their documents.

A Republican lawmaker and former Marine officer worried last week that Iran had accessed classified equipment that may have been present on the Navy boats.

“We’d be stupid to think that they didn’t. I’m glad that the sailors are back safe, but there’s no way [the Iranian military] just let those boats sit there, and didn’t reverse engineer, or look at and copy everything that they possibly could,” Rep. Duncan Hunter (R., Calif.) said Wednesday.

The sailors were arrested just as President Obama prepared to deliver his final State of the Union address to the nation Tuesday evening, during which he did not mention the incident. The arrest also came just days before the formal implementation of the nuclear deal with Iran, which is set to release an estimated $100 billion in sanctions relief to the country.