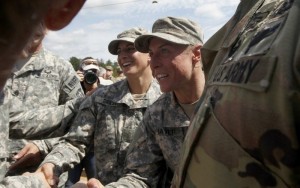 The Thursday announcement comes as a followup to the January 2013 mandate calling for the full integration of women by 2016.

“There will be no exceptions,” Carter said, noting that nearly all branches of the military agreed with the decision to fully integrate.

Only the Marine Corps requested some exemptions, he said, but those were ultimately overruled. Read more at The New York Times.