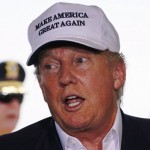 Conservative Wall Street Journal columnist Peggy Noonan thinks it’s time for Donald Trump to pull back on the very thing that seems to have gotten him where he is: his mouth.

In her latest column, Noonan, who is not a Donald Trump supporter, said as a matter of patriotism, the GOP front-runner should refine his language, which he proudly brags is lacking a shred of political correctness or sensitivity.

“A continuing mystery of Mr. Trump is his failure to impose on himself political discipline,” Noonan wrote. “He has been front-runner for six months but he doesn’t act as if he has absorbed the fact that he could become the nominee. At this point he owes it to his country — he owes it to his own ambition! — to become disciplined in terms of statements and policy.”

She contninued, “It is possible for candidates to be vivid but careful, dramatic but responsible. When you’re winning you can’t just keep pulling it out of your orifices. Mr. Trump’s lack of discipline should worry his supporters. I know it doesn’t, but it should. Because indiscipline shows disrespect. And people pick up on it, they see it.”

Despite a series of controversial comments ranging from the “Black Lives Matter” movement to Islamic terrorism, Trump has remained the front-runner of the GOP presidential field, often by vast margins in national and state-level polls.

This week, Trump agitated the national media and Republican leaders by responding to the increasing terror threat from the Islamic State and proposing a ban on all Muslims trying to enter the U.S.

Nearly all of Trump’s rivals for the GOP nomination denounced him for it.

Noonan said Trump’s lack of concern for the party is also “odd.”

“In his daily actions he could continue to excite his base while subtly signaling to party elders that while he might be an unusual nominee he would, in some recognizable way, be a responsible one,” she wrote. “Instead he ties them in knots each day and embarrasses them. That limits his popularity, lowers his ceiling of support, and reinforces the idea he’s an impetuous flake.”