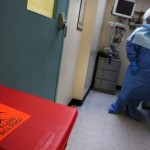 The leaders of New York City gathered at a press conference Thursday night to provide more details about the 33-year-old Doctors Without Borders/Médecins Sans Frontières physician who was diagnosed with Ebola on Thursday at New York City’s Bellevue Hospital. “We are as ready as one can be for this circumstance,” said New York Gov. Andrew Cuomo.

The patient, Craig Spencer, returned from treating Ebola patients in Guinea on Oct. 14 and reported feeling “well” enough to carry out normal routine, at one point leaving his Harlem apartment to go on a 3-mile jog. According to officials, it wasn’t until Thursday morning that Spencer-who had been taking his temperature twice a day-discovered a fever. He immediately got in touch with MSF, which coordinated a meticulous operation to bring him safely to the hospital.

“The second he had a fever he came in,” said New York Mayor Bill De Blasio. In the days leading up to his diagnosis, Spencer did venture out of his apartment, taking the L train to Brooklyn’s Williamsburg neighborhood to go bowling at The Gutter on Wednesday night. New York health officials said they are monitoring four of Spencer’s contacts, one of which is his fiancée, but all are in stable condition. Read more at The New York Times.