53-year-old Steven Eckel of Jackson, NJ, and 30-year-old Sarah Mazzone of Howell are being hailed as heroes today after they rescued a four-month-old baby from the back of a Nissan Sentra in front of a Kohl’s store in the Howell Commons parking lot in Howell just before 1 p.m. yesterday.

Using a sledgehammer that Eckel – a retired police officer from the Middlesex County Sheriff’s Office – happened to have in his car, the two smashed one of the vehicle’s front 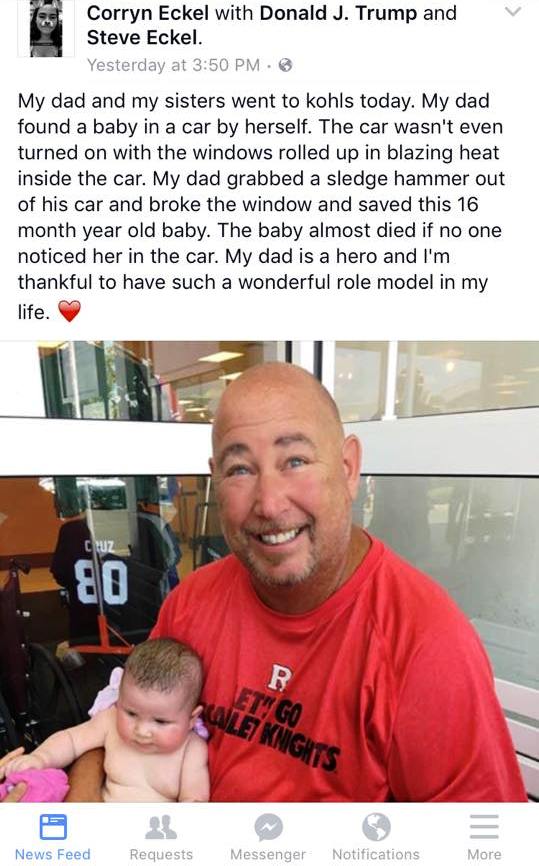 windows to get out the child, who, authorities said, had been inadvertently left in the car for about 40 minutes, the Asbury Park Press reports.

Askanim are praising Eckel and Mazzone for saving the life of the baby, whose parents reside in a nearby township.

The mother of the baby was arrested and has been charged with endangering the welfare of a child.

At least 27 children have died so far this year after being left alone in hot cars.

Mazzone, who is a schoolteacher, first noticed the baby in the car with the door locked and the windows closed. The temperature was soaring close to 90 degrees outside. The baby was “beet red” and “sweating profusely. She was half covered in a blanket and in a panic,” Mazzone told News12 New Jersey.

Walking in the opposite direction was Eckel, whom she alerted.

Mazzone rushed into Kohl’s in search of help. Eckel called police. But realizing there might be no time to spare, he began asking people in the parking lot if they had a tire iron or some other tool to smash the car’s window and extract the child.

It was “well over 120 degrees,” inside the car he figured. “She was sweating, crying, eyes rolling back,” he told CBS2 New York.

That’s when he remembered he had a sledgehammer in his car that he had been using on a project. Running in his flip-flops, he retrieved it, smashed the front passenger window and took the baby out.

“Just think of what could have happened,” he told CBS2 New York. “I do believe in guardian angels, and I think I’m the one for this child,” Eckel said.

“I almost started to cry, I got really emotional at that point,” he told CBS2.

They took the baby inside the air-conditioned Kohl’s and waited for authorities to arrive.

“In my opinion they saved the baby’s life,” Sgt. Christian Antunez, of the Howell Township Police Department, told News12 New Jersey. “Seconds could have made a difference between life and death.”

“When I got home, I still had the (baby’s) onesie,” he told Howell Patch. “My wife asked what it was, and when she picked it up, it was still soaking wet. That’s when it really hit me.”

{Andy Heller-Matzav.com / The Washington Post contributed to this report}