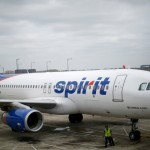 Four people were removed from a flight in Baltimore Tuesday morning after one of them apparently aroused suspicion for watching a news report on his phone.

The Spirit Airways flight was halted and officers removed the four people, reportedly of Middle Eastern descent, after a passenger reported “suspicious activity” to the crew.

“Everything added up to create a situation where she felt concerned,” said a Maryland Transportation Authority spokesperson. “Everything was done in the interest of safety.”

The people were not charged and the plane took off later. Read more at the Chicago Tribune.