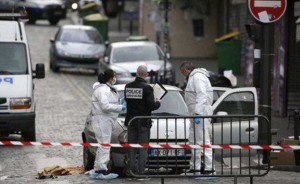 “We are ready.” These are the words that one of the Paris terrorists texted his friend a short while before committing a terror attack in the French capital. The text was discovered this evening after the police located the cellular device belonging to the terrorist at one of the scenes of the attack, according to intelligence sources involved in the investigation.

The police will now be able to examine the phone and extract the calls and text messages sent from it a short while before the deadly attack was underway.

The Chairman of the Intelligence Committee of the US Senate added that according to the information that was discovered, the terror cell in Paris apparently used coded communication before the attack.

This evening, the French Police revealed that it held photos of a ninth terrorist who took part in the attacks in Paris. Official sources in France confirmed that the police was conducting searches after the additional terrorist, who was “directly involved” in the attacks and whose identity has yet to be revealed.