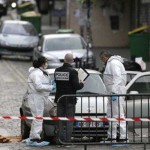 Turkish police announced Saturday that three people with suspected ties to ISIS have been arrested.

One of the arrested, a 26-year-old Belgian national of Moroccan descent, Ahmet Dahmani, is suspected of scouting sites for the Paris attacks.

The other two suspects are Syrian nationals: Ahment Tahir, 29, and Mohammed Verd, 23. Both were entrusted with transporting Dahmani to Syria, according to Turkish police. Read more at CNN.