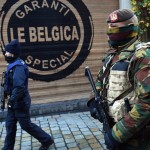 Authorities said 16 people were arrested in at least 22 raids carried out across Brussels and Charleroi late Sunday in a bid to take down a terrorism ring believed to be behind the Nov. 13 attacks that left 130 dead in Paris.

Belgian federal prosecutor Eric Van Der Sypt said no weapons or explosives were found during the raids. At least three of the nine Paris suspects were based in Brussels.

Prime Minister Charles Michel also announced Brussels will remain at the highest level of terror alert on Monday, which means that the metro, schools and universities will remain closed. Read more at The Guardian.