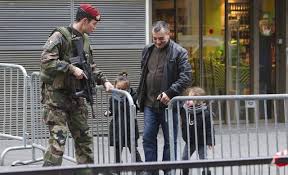 Members of France’s Jewish community expressed fear that Jewish sites may be next on the hit list of Islamist terrorists, some of whom may still be at large, who killed at least 129 in massive coordinated attacks on multiple Paris targets on Friday night.

As they huddled in a nearly empty shul for Shabbos morning prayers, congregants said that while no specifically Jewish venues were targeted by Friday night’s terrorists, such sites could be next. “It is very possible that the rest of the team will now go to Jewish places,” Rabbi Levi Mimoun, chairman of the newly formed Friends of French Jewry, told The Algemeiner.

One member of New York’s French Jewish community, who did not wish to be named, also said that those he spoke to were “very concerned about a potential second wave.”

Mimoun, speaking from Paris, painted a picture of a community in fear. At his own synagogue, attendance was only one third of the usual number, he said, and the synagogues of Paris’ 10th and 11th arrondissements, where the attacks took place, were closed completely. “A lot of Jewish people are really, really concerned,” Mimoun said.

He noted that most people were fearful of leaving their homes and that all community happenings scheduled for Sunday had been suspended. “Every single Jewish event, every single party, every single class that was supposed to happen on Sunday was cancelled,” he said. At his own institution, a Chabad house at HEC Paris business school, students insisted he cancel an event scheduled for Sunday. “All the students said they want to stay home,” he said.

French police have taken significant steps to protect Jewish sites since the January attacks in Paris at satirical magazine Charlie Hebdo and at the Hyper Cacher kosher supermarket, mobilizing some 14,000 soldiers to protect the community.

But on Saturday night, Mimoun said, at least 25 troops were seen working to secure one Paris Jewish school, far above the five soldiers that usually guard the site.

In the January attacks, the kosher supermarket siege that left four Jewish shoppers dead followed the Charlie Hebdo attack by two days, a fact that will not be lost on France’s Jewish community.

Mimoun said that policemen stopped by his house on Friday night, asking if he had noticed any suspicious activity. “We told them no,” he said, and they moved on. He added that the streets of Paris were almost completely empty. On a Saturday night trip to Ikea, he said, he was one of only two patrons in the store, pointing out that Saturday was usually the retailer’s busiest day.

Mimoun noted that the attacks were the first in which French members of the public were randomly targeted, as opposed to more specific targets, such as journalists or Jews, and expressed hope that this might lead to more widespread efforts to combat terror threats.