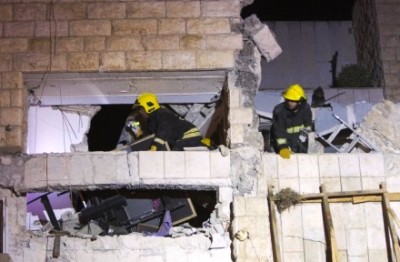 A gas explosion after midnight in Yerushalayim killed two parents and their 3-year-old child, and left eleven others injured.

The blast occurred on the third floor of the four-story building on Rechov Shabtai Hanegbi in the Gilo neighborhood in the southern part of the city, causing it to collapse partially. Emergency personnel were ordered out of the building shortly after 2 a.m., after the structure was deemed dangerously unstable.

The explosion, which was heard miles away, was the result of a gas leak, Israel Radio reported.

The toddler was pulled from the wreckage, and paramedics worked unsuccessfully to resuscitate the unconscious child. Paramedics initially feared that another child was trapped, but later estimated that there were no more residents trapped in the building.

After 3 a.m., a 20-year-old survivor with serious burns was pulled from the wreckage.

Victims of the blast were transported to Sha’arei Tzedek and Hadassah-Ein Kerem hospital.

Early this morning, police arrested a gas technician who had done work on the building Sunday evening, on the suspicion that negligent work on his part had led to the blast.

“It is hard to know the source of the blast,” said Shachar Ayalon, head of Israel’s firefighting services, told Ynet. “We will try to recreate the event and come to a conclusion on how this happened. The neighbors said they invited a gas technician. It is unclear to use what exactly he did, but there is no doubt we are looking at negligence.”

“This is a real tragedy,” said Mayor Nir Barkat, who was at the scene during the early hours of the morning.