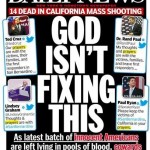 “This is the pattern we see repeatedly,” Geller, president of the American Freedom Defense Initiative, said Thursday on “Newsmax Prime.”

“It is a Sharia-compliant media,” she said, “and what I mean by that is under the Sharia, under Islamic law, you cannot criticize or offend Islam.”

Gellar pointed to the attack by Islamic extremists on a Muslim Prophet cartoon contest she held in Garland, Texas.

“They said I was being provocative,” she said. “I didn’t make those cartoons provocative. The jihadists did.”

“Mocking God, this is what they do in the wake of jihadi attacks,” she said. “The media is the largest weapon the enemy has in its arsenal, and that’s what you’re witnessing.”

The media has long abdicated their role as a newsgathering entity and has become an activist organization pushing “a giant lie,” Geller asserts.

“My God, we don’t even have a body count yet and you are working? You are spinning? You are blaming the victims?” she said. “You’re blaming God-fearing people who are praying for the victims and their families?”

The media should have asked the Council on American-Islamic Relations (CAIR) at its Wednesday night press conference about calling for programs in mosques to teach against jihadist ideology, she said.

Social media also has to act more quickly to take down accounts promoting jihadism, she said.

“Facebook is pretty quick in taking anti-jihad stuff down. I can tell you that. Anything they deem anti-Islamic, they take down pretty fast,” Geller said. “There’s a morally inverted world. There’s an inability to think, and when you’re unable to think, you’re unable to make moral judgments.

“If you can’t make a moral judgment, you can’t tell the difference between right and wrong. That is the problem on the left.”