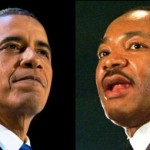 “Mr. President, in honor of Martin Luther King Jr. and all who commit to ending any racial divide, no more playing the race card,” Palin said.

Her statement was posted along with King’s most famous quote, “I have a dream that my four little children will one day live in a nation where they will not be judged by the color of their skin, but by the content of their character,” and a photograph of the memorial commemorating the March on Washington.

Her post came in response to a story in The New Yorker magazine, in which Obama says, “There’s no doubt that there’s some folks who just really dislike me because they don’t like the idea of a black president.”

Obama’s election in 2008 was heralded by some as ending the racial divide in the United States, but the country has become even more divided during his presidency. Though he won re-election in 2012, his margin of white support was the worst of any presidential victor in U.S. history, The New Yorker noted.

Also in the article, Obama said there are some “black folks and maybe some white folks who really like me and give me the benefit of the doubt precisely because I’m a black president.”