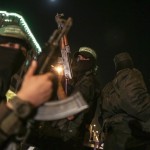 Palestinian security officials told their Israeli colleagues that in the Arab village of Qalandiya – between Yerushalayim and Ramallah – there are at least 400 M-16 rifles. That figure does not include other weapons – guns, explosives and grenades – that are in the hands of militant groups there, Ynet reports.

The Arab neighborhood of Shuafat in eastern Jerusalem is said by Israel to contain some 3,000 weapons, including M-16 and Kalashnikov assault rifles, grenades, and IEDs (improvised explosive devices).

As the IDF prepares to face a long-term wave of violence, it takes into consideration that at any given moment – and without prior warning – thousands of militants in the West Bank, mostly affiliated with Fatah’s Tanzim, could join the fight.

The Tanzim operate as Fatah’s “shadow army,” operating on the Palestinian street alongside the PA security forces. But these days, Abbas’ security forces can’t enter some of the refugee camps because the Tanzim militants kick them out.

Defense Minister Moshe Ya’alon has instructed the army to prepare for long-term deployment of increased forces in the West Bank.

Hamas is making every effort to execute a large-scale terror attack in the West Bank that would serve as the final nail in the coffin for the Palestinian Authority as it is today.

The large sums of money feeding the propaganda Hamas is spreading through social media are coming from Hamas headquarters in Turkey.

Saleh Al-Aruri, who was exiled to Qatar by the Turkish government several months ago, has returned to Istanbul with the Turks’ consent, and is leading Hamas’ campaign of incitement under the slogan: “Stab, stab!”