Thousands of Palestinians in the Gaza Strip took part today in the funeral of seven fighters from Hamas’ terror wing who were killed while rebuilding the terror movement’s underground terror tunnel network.

Hamas reported that nearly a quarter of a million attendees to the funeral of the “Izz al-Din al-Qassam Brigades fighters,” who were buried in the al-Shuhada (Martyrs’) cemetery in eastern Gaza City.

The seven terrorists were buried following a funeral march, led by armed members of the Brigades, which set off from Gaza City’s al-Omari mosque following Friday prayers. 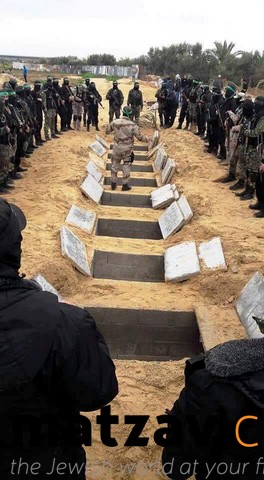 Senior Hamas terrorist Ismail Haniyeh said during the prayers that resistance was ongoing and that the al-Qassam Brigades were continuing preparations “to face any confrontation with the Israeli occupation,” adding that al-Qassam fighters dug tunnels in order to defend the “besieged” Gaza Strip.

The movement announced Thursday that at least 10 terrorists were in a tunnel in northern Gaza earlier this week when it collapsed due to heavy rains, killing Thabet al-Rifi, 25, Ghazwan al-Shubaki, 25, Izz al-Din Qassem, 21, Wassim Hassouneh, 19, Mahmoud Basal, 25, Nidal Odeh, 24, and Jaafar Hamadeh, 23.

The announcement supported previous reports that Hamas had been expanding its terror tunnel network since Israel’s 2014 offensive there aimed at rooting out terrorists.