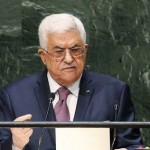 The Palestinians have drafted a U.N. Security Council resolution calling for an end to Israeli occupation by November 2016, which they have shared informally with Arab states and some council members, U.N. diplomats said on Wednesday, Reuters reports.

The text has not been formally circulated to the full 15-nation Security Council, a move that can only be done by a council member, said the diplomats, speaking on condition of anonymity. As a result, it remains unclear when, and if, it will be put to a vote.

It calls for “the full withdrawal of Israel … from all of the Palestinian territory occupied since 1967, including East Jerusalem, as rapidly as possible and to be fully completed within a specified timeframe, not to exceed November 2016.”