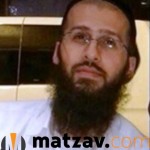 The Israeli State Attorney’s Office on Sunday indicted a Palestinian terrorist from the village of Dura for stabbing and killing two Israelis in Tel Aviv last month.

The man, Raed Khalil, was charged with two counts of murder and three counts of attempted murder. According to prosecutors, Khalil arrived at a Tel Aviv office building after taking a nine-inch knife from a nearby restaurant. He fatally stabbed a man near a makeshift synagogue on the fourth floor and then killed another passerby who rushed toward the scene of the attack. Khalil tried to force his way inside the synagogue, but those inside closed the door on him. He went down two floors and continued his rampage, and was ultimately overpowered by several passersby who hit him with a metal rod and held him in a storage facility under until law enforcement arrived.

The two Israelis killed were 51-year old Reuven Aviram, from Ramla, and 32-year-old Rabbi Aharon Yesayev (pictured above), from Tel Aviv. Khalil was in Israel on an expired permit that allowed him to visit the Jewish state for “personal reasons.”