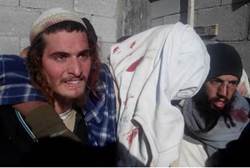 A Palestinian mob briefly captured and beat more than a dozen Jewish civilians in Judea and Samaria.

Arabs beat about 15 Jewish civilians – who appeared to be between 15 and 30 years old-with their fists and sticks, causing some to bleed from the head and mouth, Reuters reported.

One of the Palestinians said the mob attacked the Jews because they were throwing rocks at farmers. But a victim of the attack disputed that claim, saying his group was walking from the Jewish village of Esh Kodesh to Givat Hayovel when it was suddenly confronted by an Arab mob in trucks, and that the Arabs threw rocks at the Jews.

“We called the army, because we felt our lives were in danger. The Arabs gathered us into one place, tied our hands and legs, and beat us cruelly,” the victim told Israel National News.