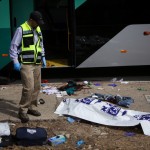 A 16-year-old Palestinian teenager from Jerusalem’s Jabel Mukaber neighborhood was indicted today for stabbing and attempting to murder an Israeli man at a bus stop in the Armon Hanatziv neighborhood ten days earlier.

According to the indictment filed by the Yerushalayim State Attorney at the city’s District Court, the accused decided on January 3 to stab a Jew to death after watching television footage of Israel returning the bodies of dead terrorists to their families