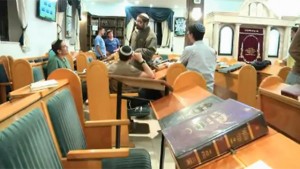 The Israeli Supreme Court approved a request on Tuesday to postpone the demolition of a shul built on Palestinian land in the West Bank, after the landowners accepted a plan proposed by the government to solve the dispute.

The approval comes with several conditions, primarily that all worshipers and holy books are removed from the synagogue in Givat Ze’ev within the two allocated days, and that the government begins demolishing the structure.

The heirs of the Palestinian landowner informed the Supreme Court on Tuesday that “in order to prevent bloodshed” they accept the plan proposed by the government for the evacuation and demolition of the shul, but set several conditions:

– A week after the completion of the demolition, the fence built on the property will be removed, and the petitioners will be given access to the land, as is the situation in similar nearby plots.

– The government must provide guarantees and assurances that it would meet the set deadline, in light of previous repeated violations of the government’s commitments.

– Failure by the government to execute the plan and meet the conditions set by the land owners will result in the immediate demolition of the structure, as well as significant financial sanctions.

– The government must commit not to seek further extensions for the deadline.

– The government will be required to address the conditions set by the Palestinian landowners, following which the court will decide whether to allow for another three weeks to complete the demolition.

The government offered a NIS 5.2 million compensation to the settlers in the form of a new synagogue that will be built elsewhere in the settlement, as well as a new sports facility.

The legal NGO Yesh Din, which represents the Palestinian landowners, said the plan constituted a “humiliating surrender of the representatives of the rule of law to the threats of the extreme Right.

“At the end of the day, it appears that crime pays. Invading someone else’s lands, illegally building a structure, violating legal orders by this honorable court, unlawfully barricading at the synagogue, threatening violence and bloodshed – all of these, rather than law enforcement, have led to cooperation between the political echelon and these criminals,” Yesh Din wrote of the government plan.

“These criminals also ‘win’ a present from heaven in the form of a legendary budget of NIS 5.2 million. We’ve never encountered such blatant cooperation between the government and criminal actions and threats of terrorism, done to accommodate extortion based on the need not to enforce Supreme Court rulings.”

The dispute over the shul has been debated in the courts for many years, and began with a petition filed by Yesh Din on behalf of the Palestinian land owner. The Supreme Court accepted the petition in the end, and ordered the demolition of the synagogue, which was supposed to happen Tuesday after many extensions.

Over the past few years, hundreds of teens, rabbis and public figures arrived at the shul to support the settlers’ efforts to prevent the demolition.