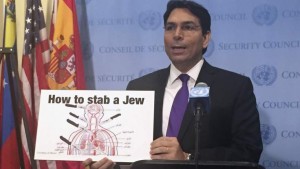 Palestinian children are being “brainwashed” with “incitement and hate,” according to an Israeli spokesman.

Danny Danon, Israel’s new ambassador to the United Nations, is urging the Security Council to make a statement against what he described as “the incitement that fuels terror.”

During his speech, Mr Danon held up a piece of card with a diagram of a human body entitled “How to Stab a Jew,” which he said was “an example of what Palestinian children are being exposed to day in and day out, in school, after school,”

Sky News has been unable to verify Mr Danon’s claims, in which he said: “When a Palestinian child returns from school and opens (sic) the television, he doesn’t see Barney or Donald Duck, he sees murderers portrayed as heroes.

“When he opens a textbook, he doesn’t learn about math and science, he’s being taught to hate.”

Holding up the card, Mr Danon continued: “The picture is being taught in middle schools, in high schools, in elementary schools.

“Instead of educating about peace and tolerance, the Palestinian leadership is brainwashing children with incitement and hate.

“Palestinian leaders have established an incubator to raise children as terrorists.”

Danon accused Palestinian president Mahmoud Abbas of leading the “dangerous incitement” and of “spreading lies” saying Israel is trying to change the delicate status quo at the Har Habayis.

Danon said Israel would not agree to any international presence at the compound, adding that “any such intervention would violate the decades-long status quo.”