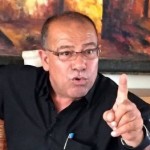 A prominent Palestinian human rights activist lamented this week what he called the media’s unfair treatment of the Jewish state.

At a pro-Israel gathering hosted by advocacy group StandWithUs in New York City, Bassem Eid, a Jerusalemite, said the press, which is “full of antisemitism” and “hatred,” is “much more interested in fighting against Israel” than discovering the truth. So, he added, “Let us [Palestinians] tell the world what we are really suffering from.”

Eid, a former director of the Palestinian Human Rights Monitoring Group (PHRMG), said Palestinians are “fed up and hopeless,” and have lost trust in the Palestinian Authority (PA). Meanwhile, he asserted, Israel is “the safest place” for Palestinians in the Middle East.

He continued, “When Israeli Arabs complain about Israel, I tell them, ‘So move to Syria, go to Yemen…’ And they can, but it’ll be worse for them there.” He also cited a recent survey conducted by the Washington Institute for Near East Policy which revealed that a majority of east Jerusalem Arabs would prefer living under Israeli rule than Palestinian.

Talking about the current wave of terrorism sweeping Israel, Eid said, “When I watch TV and see a Palestinian youth — 13, 14 or 15 years old — holding a knife in his hand, running in the street and wanting to stab and kill, I think it’s the most barbaric thing I’ve ever seen. Will stabbing Jews solve my problems? Will killing a Jew solve my problems? Look at Hamas — in the past nine years they’ve been shooting rockets. What have we, as Palestinians, achieved? Let us be a little bit realistic.”

He went on, “I [as a Palestinian] don’t want to be a victim anymore… I want to be considered as a human being who has full control of my own future and my children’s future.”

Eid also claimed that Jerusalem has become “a victim” of several competing Palestinian political movements, including Fatah, Hamas and even Islamic movements inside Israel, who, he said, are all “adding oil to the flame.” He said Fatah’s only interest at the moment is to escalate the violence in Israel, and that even if Abbas were to call on Palestinians to calm tensions in east Jerusalem, “No one would listen to him.”

This is one of many reasons Eid believes that Palestinians will have to wait at least another generation — “20-25 years” — for a solution to their plight.