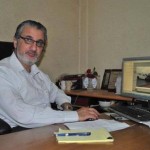 Sweidan was detained due to a report published on the website of Nablus TV, which Sweidan runs in the northern West Bank. The report accused the PA’s preventive security service in Nablus of helping Israel detain locals from the village of Beit Furik who allegedly shot dead an Israeli settler and his wife on Oct. 1, 2015.

An Israeli military spokesperson said at the time that several shots were fired at the settlers’ car from a passing vehicle, which fled to a nearby Palestinian village following the shooting.

The district attorney decided today to extend his remand for 24 hours.