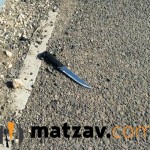 The Palestinian Authority on Sunday accused Israel of planting knives near the bodies of Palestinians who are killed during stabbing attacks against Israelis. However, after Ashraqat Katnani, 16, was killed after she tried to stab Israelis near Nablus, the girl’s father, Taha, was quoted by Palestinian media saying that his daughter set out to seek “martyrdom” and “I’m proud of her.”

Ofir Gendelman, Prime Minister Netanyahu’s Arabic-language spokesman, said that the father also said: “She wanted to stab, asked me about the best knives in the house.”

Meanwhile, the Palestinian government described the killing of the 16-year-old Palestinian “schoolgirl” terrorist as a “brutal war crime against humanity and childhood.”

In a press release, the PA said Israel “has mastered the art of distorting the truth to mask its crimes by accusing every [Palestinian] victim of plotting a stabbing attack and planting a knife next to the body to support its allegations.” The PA stressed that Ashraqat Katnani was “a victim to Israel’s terrorism.”